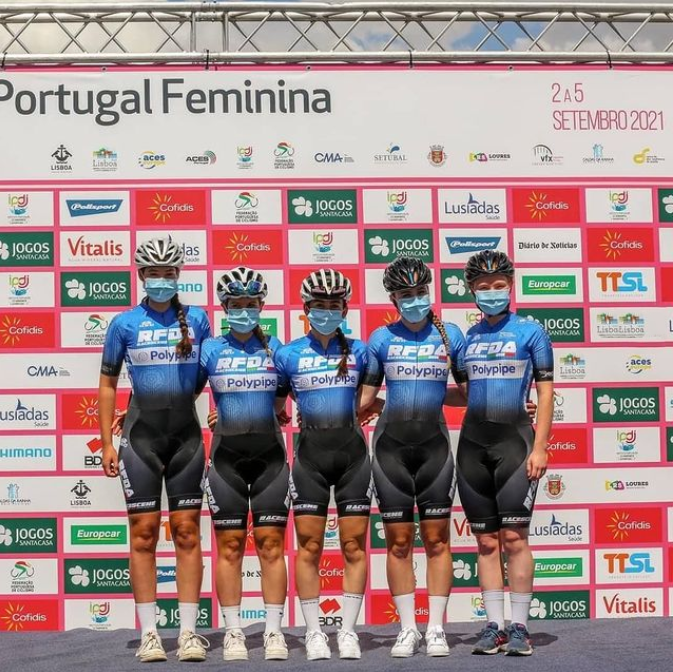 The Racescene Female Development Academy (RFDA) is celebrating its performance at the inaugural Women’s Tour of Portugal, which saw the young team compete against Olympic cyclists and competitors from European Tour and World Championship events.

The RFDA is rare in UK amateur cycling, as it supports only female riders and is enjoying its third year of competitive cycling. Since its launch in 2019 Polypipe has been a key supporter and sponsor of the team.

The team was invited by the Portuguese Cycling Federation to take part in the event following a recognition of the work the team is doing in promoting female cycling in the UK.

Five riders and a support team competed in four stages during five days which took in long courses with steep climbs, intense heat, and time trials throughout the region surrounding Lisbon.

Each stage of the event posed a different set of challenges for the young riders, with their progress being monitored by their race support team from radio cars throughout each race day.

A full race report on the progress of the RFDA team is available on the team’s Facebook page: https://www.facebook.com/RacesceneFDA/

There is also a video of RFDA highlights from the event:

Team manager Andrew Briggs organised the trip and was delighted with the event:

“The whole experience has been brilliant. As team manager I would like to thank the riders for giving their all, no matter what came their way; the support team for their help; Iuri of Velo Performance for his skill and advice in the team car; and Polypipe for their financial support to help make dreams come true for these young girls.

“They were up against riders that were at the Olympics as well as riders that will be at major events in years to come, including European and World Championships.

“The riders should be incredibly proud of how they have done in a tough event and be excited that they can more than compete with the best across Europe in the coming years.”