InfraWeb cellular confinement systems serve to spread loads that are imposed upon the system. Furthermore, in many instances it is possible to use locally avaliable, inexpensive aggregates in a multitude of stabilisation projects such as: roads, access lanes, runways, car parks, railway track bedding, beddinf for sewer and water pipes. 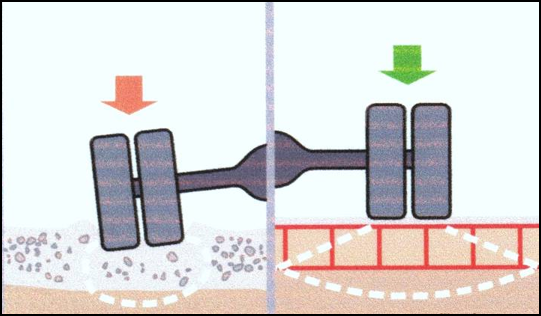 Considerable savings can be achieved by infilling with local soil, so that hauling of expensive infil material is avoided. for instance, 100mm cells filled with sand are equivalent to at least 300mm of sandy gravel or 250mm of crushed stone. Furthermore, stresses on the soft subgrade beneath the cellular reinforced soil are reduced by >30% and deflections have been found to be 15% lower when compared to unreinforced layers.

It has been shown (Koerner, Designing with Geosynthesis, 4th edition) that the bearing capacity of sandy soil is increased thirteen fold when a 200mm geocell is used and infilled with the same material. The mechanism is explained by the fact that the higher cell wall/ infill interface friction increases the resistance to vertical deformation of the infill material relative to the cellular structure. With an increased densification of the infill material, the improvement in bearing capacity can be exponential.

Additionall, maintenance costs are reduced to a minimum thanks to the fact rutting is eliminated. If so required, InfraWeb can be removed from the site once the road becomes redundant and the site can be returned to its original conditional. In this context, it should be noted that reconstruction of asphault surfaced roads with cellular confinement systems can reduce the stresses on the subgrade by approximately 30% thus helping to ensure the longevity of the road.

The InfraWeb cellular confinement can also be used to reinforce roadside verges and provides a cose effective solution for the prevention of rutting and material wash out.

Unstable railway embankments and track settlement cause considerable problems and difficulties in track maintenance, and have significant cost and time implications. Such factors can lead to decreased train speed and in extreme cases to the shutting down of track sections. Over the last 20 years considerable work has been undertaken, using confinement systemsover compressible soils to provide full stability and resistance to static and dynamic loads.

This solution, when compared to more traditional methods, offers decreased maintenance time and cost, whilst maintaining track strength parameters for longer periods of time. Cellular confinement systems have been used not only for the construction of new tracks, but also to repair subballast and railway embankments.